I’d recommend Jack and Jill’s Downhill Marathon as a great race. It’s a fast course and has pretty scenery. Be prepared for wet conditions and for downhill that will eat unprepared quads. Overall it was a great experience for me. 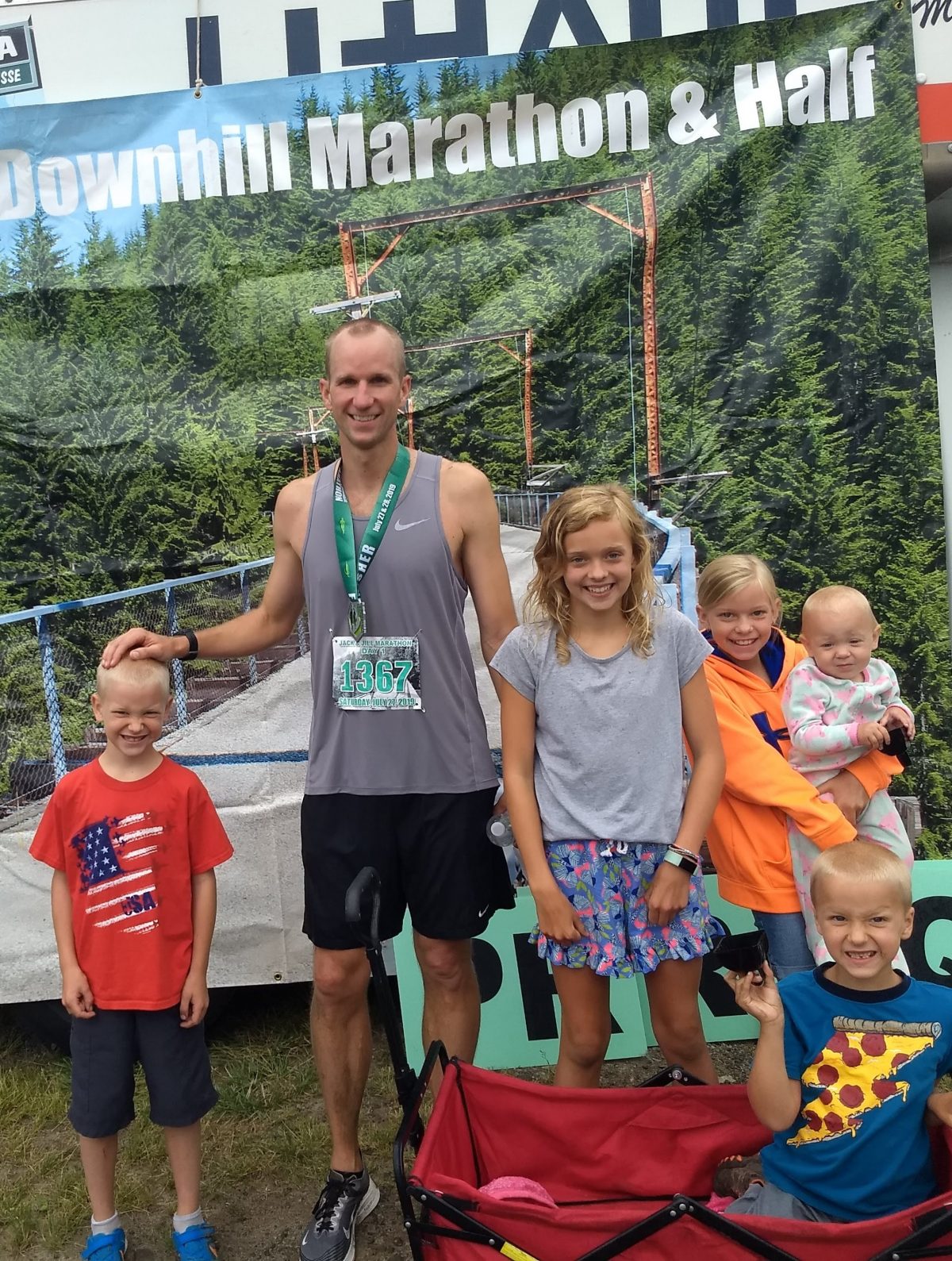 Jack & Jill’s Downhill Marathon starts at Snoqualmie Pass, a few dozen miles east of Seattle. It begins with a two mile train tunnel and then follows a train track that’s been converted to a dirt bike/hiking/running trail. The trail is hard-packed dirt with a little gravel. (I wore road running shoes and they were fine.) The vegetation is lush on both sides of the trail, and the elevation decline is a very gradual ~80 feet per mile for essentially the whole course. There are half marathon and marathon races on both Saturday and Sunday. I signed up for the Saturday marathon which had about 700 runners.

It was a 7+ hour drive from the Boise area. There aren’t many (or any?) hotels around North Bend, WA where the race ends and where packet pickup is. The nearest hotels are about 10 miles west, they were pretty pricey, and we had all our children with us, so we decided to camp. There are two camp grounds nearby which I’m pretty sure were all full, but luckily there is dispersed camping all along the roads that run parallel to the freeway. We found a nice spot and set up camp. Packet pickup went smoothly and the shirts they handed out were nice racing singlets.

We ended up grabbing some food at Safeway to eat — a roasted chicken, some rolls, and JoJo’s (potato wedges). It was actually a decent pre-race meal. We also threw in some ice cream and of course s’mores since we were camping. Camping the night before a marathon means even less sleep than usual, but I didn’t expect much sleep anyways, so it was fine. I “woke up” at 4:30 and Cyndi took me to the starting line. The marathon powers that be had assigned me a bus time of 4am, so camping a few miles from the starting line worked out well.

It was drizzling while we waited for the race to start. I talked to a few people about the course and previous marathons and general runner-talk. Despite the rain it was fairly warm — about 60F. The race started right about on time.

Jack & Jill’s Downhill Marathon starts on a pathway and after a half mile curves around into an old train tunnel. Runners had been instructed to wear headlamps and/or carry flashlights. I did both. Since there were ~700 runners and we were still pretty bunched up, there was sufficient light to see the muddy spots, holes, drips, etc., even with my cheap lights. The tunnel was cool, dark, and damp. Running through the tunnel was great. I looked back several times to see all the headlamps behind me. Looking forward, you could just barely make out the other end of the tunnel, or at least I could as I’m 6’4″ and I was in the top 15 runners. The light gradually got bigger until we were out.

There was an aid station shortly after exiting the tunnel, and I was able to drop my flashlights there for pickup at the end of the race.

I was amazed to see that at mile 3, my Garmin Forerunner 235 was dead on the distance. I’m not sure how it kept accurate distance in the tunnel.

I tried to keep my pace somewhat conservative through the tunnel, although I felt myself getting a little fast as a lead group pulled ahead. I ended up keeping just slower than my overall target pace, which is what I intended with the first miles.

Once out of the tunnel, Jack and Jill’s Downhill Marathon is mostly the same thing for the next 20 miles: a very gradual downhill with little curves and trees everywhere. The trail is double-track, with a slightly raised, rocky middle. I mostly kept on the hard-packed track on the sides, but I crossed the middle several times to attempt to run tangents. The forest is lush on both sides of the trail, with towering pine trees, wildflowers, and brush. Occasionally we’d see glimpses below of the river, the freeway, or the mountains on the other side of the gorge. However, it was drizzly/rainy and gray, so visibility wasn’t great. I was thoroughly wet even coming out of the tunnel, and I stayed wet for the whole race. There was a significant headwind at a few points in the race, although the curves mitigated it a bit (we weren’t running directly into it for too long at any time). We also went over a few bridges which I thought were spectacular. Sometimes we’d run on a bridge even with the tops of the towering pines from the ravine below.

The downhill in Jack and Jill’s is nice and gradual. It isn’t crazy like Big Cottonwood or the other Revel races, but it’s good enough to provide a good speed boost. I tried to do a little extra downhill training to prepare for this race. Anyone who doesn’t will probably suffer in the form of ripped up quads.

I came out of the tunnel somewhere around 10th-15th place. The pace I fell into was slightly aggressive, but it was basically where I wanted to be. I wasn’t sure I could run a PR, but I thought I’d give it a shot. To run a PR I’d need to hit 6:27/mile; I settled into low 6:20’s. One runner from the group ahead started slowing down around mile 6 and I caught up with him. It was his first marathon, so I surmised he’d gone out a little too fast (I didn’t tell him that). Later on I passed a couple runners who had to take a bio-break. Then I caught up with one more guy around mile 10 from Vancouver. I ran with him for a while and we chatted a bit before we got separated.

Around mile 12 a lady came up fast behind me and passed me before we got to the halfway mark. I was feeling pretty good. I had a few tired spots, but overall I thought I had an outside shot at a PR still and my pace was right on target. My nutrition was going down well although I realized that I’m starting to tire of Honey Stinger Waffles. I used to love them, but I’ve eaten so many and I’m starting to associate them with tough marathons too much.

Around mile 17 I had to start pushing a little harder to keep my pace. It had been fairly smooth before that. Sometimes I thought the course was leveling out, but it remained gradual, dependable downhill.

I started breaking down at mile 19 of Jack and Jill’s Downhill Marathon. My legs just couldn’t hold it any more and the pain suddenly started to spike. I was still in decent condition overall, but my legs were tiring out. I hadn’t done a 20 miler since running Boston in April, so before the race I was concerned about what would happen as I approached mile 20. I think up until mile 19 I was on PR pace, but it wasn’t going to happen in this race.

I trudged on and held the line better than I often do — I didn’t run any miles slower than 7:36. I forced myself to eat one last Stinger gel at mile 20 even though I didn’t want to. I was glad I got it down since the liquid fuel helped me in the last few miles. I didn’t have a total “bonk” like what happened in Boston and what has happened to me a dozen times, it was more just tired legs that wouldn’t move like I wanted them to.

The course finally changed during mile 22, with some sharp turns and changes in scenery. It was also really muddy as the rain poured beyond a drizzle. Instead of running tangents I began running to avoid puddles.

I think I got passed by two people who had strong finishes and didn’t fade like I did. As usual, I was very happy to see the finish line and to see my family waiting there for me.

I ended up running an official time of 2:54:37, which I was happy with. The pace was about 13 seconds slower than I hoped for, but I was glad that I still ran sub-3:00 despite not having the best summer of training. That was good enough for 13th overall and 1st in my age group.

I’d recommend Jack and Jill’s Downhill Marathon as a great race. It’s a fast course and has pretty scenery. It was well organized with sufficient aid stations, port-a-potties, and volunteers. Be prepared for wet conditions and for downhill that will eat unprepared quads. Overall it was a great experience for me.