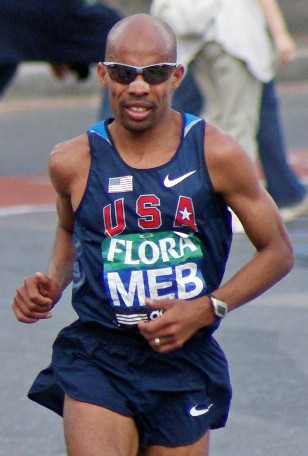 Besides the enjoyment that comes from reading about something you’re interested in (running in this case), reading about running can also lead to better running. This is where Meb for Mortals comes in.

Meb for Mortals was written by Meb Keflezighi (with Scott Douglas), who’s fame really soared when he won the 2014 Boston Marathon — the first American runner to win it since 1983. He also won the 2009 New York Marathon, placed 4th at the 2012 Summer Olympics, and won Silver at the 2004 Summer Olympics. Of course he has many other running accomplishments as well.

Meb for Mortals was obviously written to cash in on his fame after his Boston Marathon win and to reward his sponsors. Some readers may be turned off by Meb’s transparent references to his sponsors throughout the book, but it didn’t bother me for two reasons: (1) Meb’s sponsors enable him to run professionally — he must be grateful for each of them and this is a good way to reward them. (2) Meb really uses the products that he mentions in Meb for Mortals, so it’s fair that he mention them. An example of this is the Ellipti-go, which Meb uses regularly for cross training and was using during his training before his Boston win.

That brings me to what I loved about Meb for Mortals: The book is essentially all of Meb’s thoughts and many details on how he trains and why he trains the way he does. Here is a world class marathoner, one of the best ever, who has given any person willing to read his book significant insight into how a professional trains.

I’ve read dozens, perhaps hundreds, of articles about running, not to mention a few books. Many of them have conflicting advice:

The list could go on, but I knew as I was reading Meb for Mortals that this is how Meb Keflezighi trains, so it can’t be far off the mark. That knowledge is great context for the book. Note the dates in Meb’s accomplishments that I listed above. He was one of the best marathoners in the world in 2004 and in 2014. Meb was just two weeks shy of his 39th birthday when he won Boston. When I heard that a 38-year-old won Boston, I was inspired. That means there’s hope for me (not to win Boston, but at least to continue improving)!

Here are some great pieces of advice I took from Meb for Mortals:

There are a couple things about Meb for Mortals that I didn’t love. First: Some of Meb’s advice is difficult to employ since most of us non-professional runners can’t be as committed as Meb. For example, he says that stretching and strengthening is more important than running an extra mile. This may be true when you’re running 120 miles per week, but when you’re running 30 miles per week ever mile is much more important. That said, Meb points out that you should try and just implement what you can. You don’t have to do it all. Try stretching a couple times per week as a start.

The other thing that I missed from Meb for Mortals was that there’s no training regime I can follow. Run Less Run Faster is full of different 16-week training schedules that anyone can apply. These are useful to have. Since Meb is an elite, it doesn’t really make sense for him to detail out his 16-week programs. He gives some detail on what he does before his races, but it’s so beyond my abilities that it’s rendered mostly irrelevant to me.

That said, I still loved Meb for Mortals. In fact, I need to re-read it. I loved Meb’s frank advice. I loved his tips and opinions about everything from vegetarianism (he doesn’t recommend it) to GPS units (he uses one). Meb and his book are inspiring to me and I hope to put much of Meb’s advice into practice.