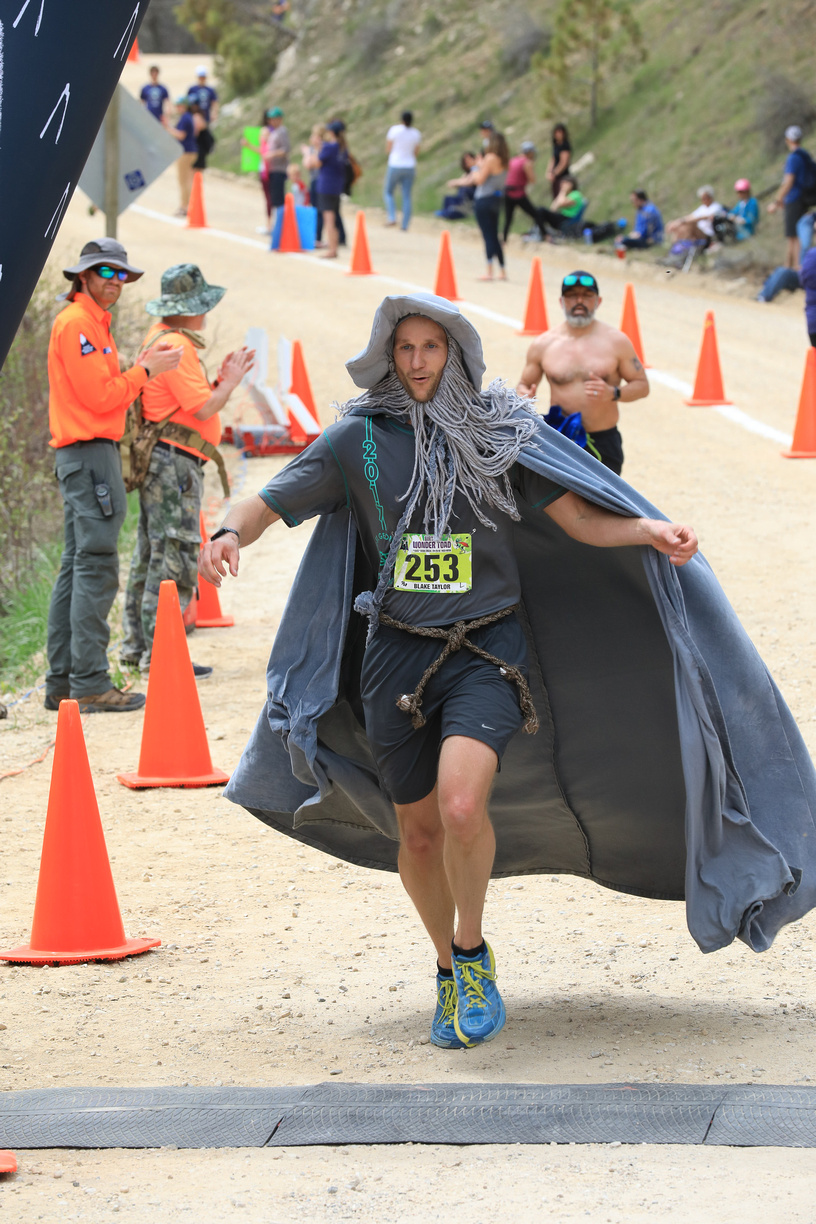 This was my ninth time running the Race to Robie Creek, which definitely makes it the race I’ve done most frequently.

In my post about my 2016 race, I outlined how my times had improved over the years. It turned out that 2016 was the peak (so far). I skipped the Race to Robie Creek in 2017 to run the Boston Marathon. In 2018 I had a knee injury that sidelined my training and hurt my fitness leading up to the race (I forgot to post about it).

This year I ran the Boston Marathon on Monday and would be running the Race to Robie Creek five days later, so I had very low expectations for my time. I used Tuesday through Friday to rest, but I was still sore coming into the race, especially since I blew up at the Boston Marathon. Therefore, I decided to have some fun this year.

I ran the race as Gandalf the Grey.

The Race to Robie Creek had a superhero theme this year. Cyndi made me a Gandalf costume when The Hobbit was released in theaters so that I could dress up for the premier. I wore it to all three Hobbit movies and every Halloween since. For some time I’ve wanted to run a race as Gandalf. Given that I was wiped out from the Boston Marathon anyways, and with the superhero theme, this seemed like a great opportunity to fulfill my dream.

The costume worked pretty well without too many modifications. I usually wear a robe under the huge cloak, but I decided to ditch the robe and just wear grey shorts and a grey shirt. I still wore the rope-belt and the satchel. I didn’t carry a staff. Cyndi modified the beard so that I could pin it to the pointed hat and let it hang under my chin while I raced (I didn’t want to be breathing through a fake beard for the whole race). The cloak has a ton of fabric and must weigh 4-5 pounds.

I’m not the most outgoing person, so when Cyndi and I arrived at the start area I felt a little uncomfortable. Nevertheless, I walked around as Gandalf. A couple people asked for a photo with me (this is pretty common when I’m dressed up as Gandalf the Grey). I did my usual prerace routine, except that I didn’t warm up a lot since I was sore anyways and I wanted to save my energy.

I wished Cyndi good luck and lined up pretty close to the front, which made for some good photos with Gandalf behind all the serious runners. Including one that made it into this article in the Idaho Statesman (I’m about 4 people back from the front, and in one of the attached photos, although there’s an error in the description).

I was a little concerned about me or someone else tripping on my cloak, so when the race started I was careful to grab it to prevent it from getting away from me.

I ran the first mile in 6:40, which I was pretty happy with. The first mile has a lot of spectators and it’s the only flat mile of the course. Lots of people recognized me as Gandalf and cheered for me as I ran by in the crowd.

Since runners always start fast in this race, I started passing some people in the second mile on the hill. The runners also started thinning out, which meant that Gandalf the Grey got more attention and cheering.

I was still feeling good when I crested the first hill, but my quads really felt the short downhill portion. This was concerning since I was only 2.5 miles into the race. I was also somewhat concerned about the heat — it was mid-60’s and the sun was out. I was wearing a grey cloak and a hat and beard, plus normal running clothes underneath.

Throughout the race I struggled with how to contain the cloak/cape. In my mind I thought it would gently flap behind me as I ran. Reality was that its length and heaviness caused it to wrap my feet if I wasn’t holding onto it with both hands. I still let it go sometimes for photos or for small crowds so they could see the full effect.

After the little downhill portion it was back to climbing, which was much gentler on my quads. I was now in a relatively fixed position relative to other runners. At one aid station around mile 5 a man was counting out runners and I was number 78. This was a pleasant surprise. I would be very happy with a top 100 finish as Gandalf the Grey at the Race to Robie Creek.

Up the hill we trudged. The heat didn’t get to me as much as expected, and eventually we got some cloud cover that really took the edge off. I drank extra water to ensure I wouldn’t get dehydrated.

Since runners were now pretty thinned out, I got big cheers whenever I came up on an aid station or group of spectators. I made a lot of people smile and yell the classic, “You shall not pass!” or a simple, “Gandalf!” It made me smile too. It was actually quite fun. I even made all the photographers smile. I gave lots of high-fives and fist pumps.

As always, it was a relief to crest the hill at mile ~8.5. For the downhill I had to really grab onto my cloak and push hard on sore quads. Surprisingly I was able to approximately maintain my position going down the hill. I was 57th to the top and 66th to the finish. I was afraid it would be much worse than that.

On the downhill there were several groups of residents with friends that were drinking beer. They really appreciated Gandalf.

As I came to the finish I let the cape flow and gave some fist pumps. I got a good finishing cheer from the crowd, and I was very pleased with my finishing time of 1:42:42. My pace was 7:49/mile (keep in mind, 2100 feet of climbing). I think I was the first finisher in full costume, which also made me happy, although that’s not an official division.

It was really a fun experience. All the smiles made it worth it. Cyndi came in around 2:15. After I was done, tons of people said, “You didn’t run the whole thing in that, right?”

Maybe next year I’ll actually improve my 2016 time… without Gandalf.

Here’s a KITI news article about the race (I have a ~5 second interview near the end).