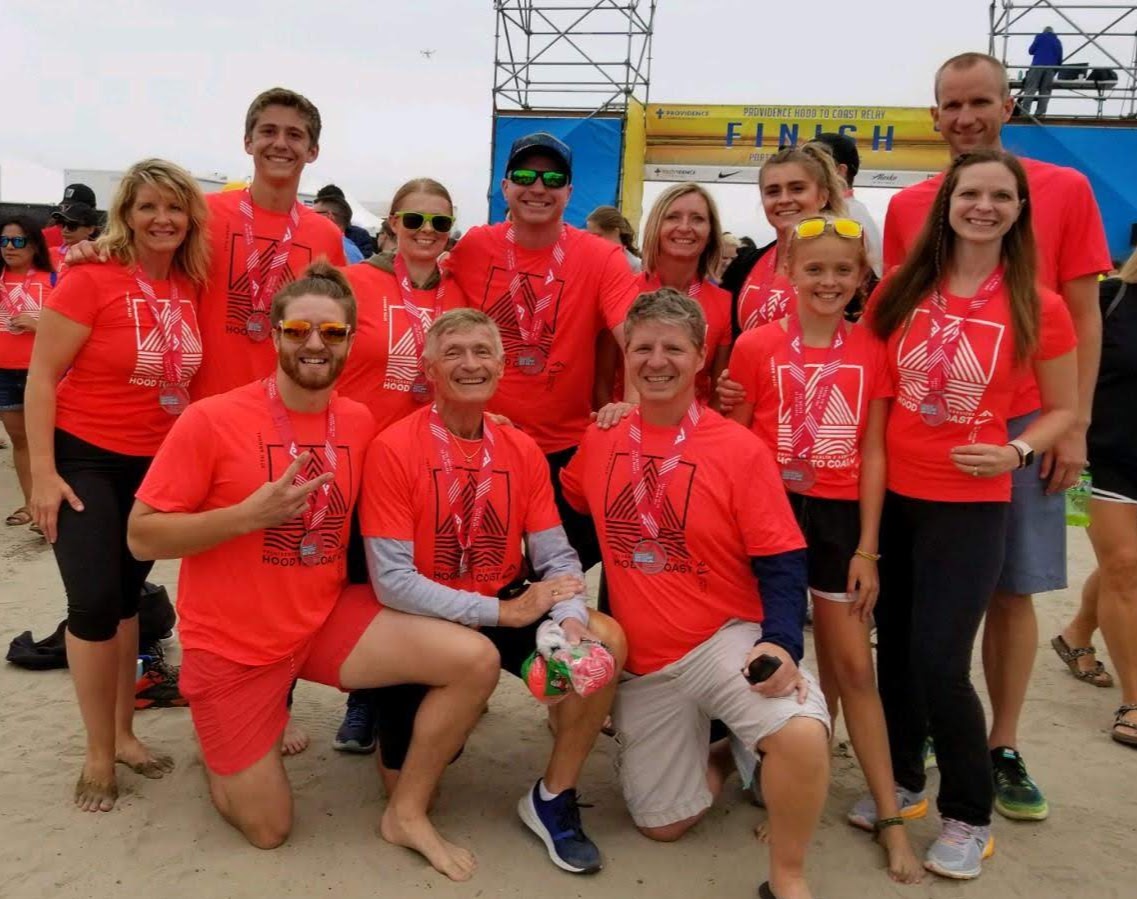 Before this year, my father-in-law had run in the Hood to Coast Relay 19 times. His birthday is in late August, which is right around the time Hood to Coast takes place. So this year he put together a family team for his 70th birthday and 20th Hood to Coast. I got to run Leg 5 and I had a great time!

Hood to Coast is a 199 mile relay that begins at the base of Mt Hood and ends in Seaside, OR. It starts with some steep downhill on a highway in the forest, continues through some smaller towns amidst farmland, then into Portland, along the Columbia River, through windy forest roads, and finally onto the finish line at the beach.

Hood to Coast is truly the “mother of all relays”. It boasts 1200 teams, and triple that many team applications. It has some elite teams sponsored by Nike and others that finish at just over 5:00/mile pace. Hood to Coast is the relay that inspired the creators of the Ragnar relays.

Our kids had already started school before the race, so we waited until Thursday after school to head from Idaho to the Portland area to meet up with family. The drive went pretty well and we pulled into town around 11pm, so we basically went right to bed.

The next morning we woke up and I hopped in with Van 1 to head to Mt. Hood. It was quite chilly and breezy at the base of Mt. Hood, but it was a fun atmosphere. This was my 4th big road relay, but it was my first time in Van 1. It was great to be there at the start as we started our journey across a large chunk of Oregon. My father-in-law, Jerry, ran Leg 1.

Jerry handed off to Cyndi for Leg 2.

The first few legs of Hood to Coast are pretty steep downhill. However, I was running Leg 5 which had a decent amount of uphill to it. I was targeting a ~6:30 pace for the whole race, so I figured I might take it easy on my first leg. I ended up feeling pretty good and hitting a 6:23 pace. All three of our volunteers were on my leg, so that was pretty fun. Two of them were handing out water and the third was at Exchange 5. Overall it was a nice first leg.

I handed off to Monte, who was 2-3 minutes late to the exchange thanks to a long line of traffic. I promptly drank my first chocolate milk, which I now believe is the secret to keeping my stomach calm during a relay.

We met up with Van 2 at Exchange 6. They were excited to be starting their first legs. We had some spectators who met us there as well. Also, we substituted a few runners in and out. Since it was Jerry’s 70th birthday, he wanted to give a some of his 34 (?) grandkids an opportunity to run, and they couldn’t all handle three legs. Also, Cyndi had just delivered a baby ~7 weeks earlier, so she only ran one leg. This isn’t exactly up to regulation, but we weren’t exactly a competitive team.

Van 1 stopped for a while at a nearby Wendy’s and we met up with our volunteers there. My daughter, Paisley, was now in the van in Cyndi’s place, and we each had a baked potato. That was probably the nicest meal I’ve ever had during a road relay. After relaxing for a while, we endured rush hour traffic through Portland to get to Exchange 12.

Paisley would be running Leg 13, but since it’s on the river front (with a river front type of crowd mulling around) and it would be getting dark, I ran with her for her 4+ miles. It was a nice and easy pace, so it felt pretty good. She was super nervous to take the hand off in front of the big Exchange 12 crowd under the overpass.

She had a nice finish and was really excited to be part of the relay team.

I gobbled a Kind bar and a breakfast bar to refuel before my next run.

Jerry ran Leg 14, then Tyrel ran Leg 15, then Christy ran leg 16. The Hood to Coast traffic was starting to back up considerably at some of the exchanges. We had to wait a long time before Christy could get out of the van to meet Tyrel.

It was back to me for Leg 17. While I was waiting in line at the Honey Bucket, I had a nice conversation with a Marathon Maniac. He said he was getting too old to run, and he had lost count of how many marathons he’d done.

I was a little nervous for my third run in the last 12 or hours. It would be my longest, and I wasn’t sure how fast I’d be able to go. Fortunately it was a nice temperature with little wind and I ended up feeling just fine. I went faster than expected — hitting 6:10/mile (excluding the annoying 37 second stop I had to make at a crosswalk right before the end).

At this point I really wanted to take a shower, and there was one at this exchange, but we had to move to Exchange 18. It annoyed me that all the showers were basically unavailable to the 5th and 6th runner in Van 1.

I don’t remember Exchange 18 very well, except that Van 2 complained that we had kept them awake by texting at each of our exchanges. I asked them if they were familiar with “airplane mode” and I also reminded them that at Exchange 6 they had complained that we didn’t give them enough information. It was pretty funny to me, although I do feel bad they didn’t get to sleep as much as expected.

We made the drive to exchange 24. When we got there we were all very tired. It was foggy and dark and this would be our one chance to sleep. We had planned on having a big tent set up, but there was a miscommunication and it didn’t work out. I ended up just placing a tarp on the ground and rolling out my pad and sleeping bag on top of it. None of the other people in my car came with me, so I just set my alarm to make sure I could find them before it was time to go. There was some risk of getting lost in this huge, dark exchange.

I was able to get a couple hours of decent and much needed sleep when it came time to wake up. I went to the car and found the rest of our runners packed inside. In a previous relay race I learned that sleeping with everyone in the car is a bad idea, so I’m glad I wasn’t squished in there as well.

Eventually our other van arrived and we found them despite the lack of cell phone reception. I didn’t even see their runner come in because I was getting ready to get back in the car. Christy started running just before 6am, right as dawn approached.

Jerry and Tyrel both ran about 6 miles. Traffic was getting bad, and Jerry had to wait a few minutes for Tyrel to use the Honey Bucket. Tyrel had a strong run and passed loads of runners that were slowing down on their final leg. Paisley went really fast on her run, and traffic was such that I jogged the last half mile with her at a 7:30 pace.

I then reset my watch and headed out for Leg 29, my most challenging leg: a 6 mile run with 566 ft vertical. I hit it really hard. I was trying to pass as many people as possible to keep up with all the people Tyrel passed, but that didn’t happen. I passed a couple dozen people, but overall everyone was pushing hard up the hill. At the top of the hill there was a small of people cheering, including my van. That made this leg extra fun. I pushed hard down the hill as well and I came in at a 6:11 pace, which I was very happy with.

Monte took the baton and our van headed to the last big exchange before the finish. There were tons of people, and we had been running faster than expected, so we spread out to find our other van and give them a heads up. I eventually found them and they were surprised to see us. They had been battling traffic and had only been at the exchange for 30 minutes or so, so they weren’t thrilled to see us. They got going and Van 1 was very happy to be done.

Some of us took a much needed shower at Seaside and then spent some time at the beach waiting for our team. We all finished together and we celebrated with a delicious seafood lunch.

I’ve learned a few things during previous relays that helped make this one my most successful in terms of comfort level:

Relays aren’t exactly my favorite type of race, but they can definitely be fun and challenging. I’m sure I’ll do more in the future, and I hope Hood 2 Coast is included in that.