Over the weekend Cyndi and I took our three oldest children on a backpacking trip to Hell Roaring Lake. This was a trip I was looking forward to for some time and it turned out great.

Two years ago Cyndi and I did a backpacking trip in the White Clouds area without any kids for our 10th anniversary. We hired Cyndi’s niece to babysit while we were away, and it went well. I determined that I really wanted to make backpacking a yearly venture for our family, but the kids were just too small to make it worth it.

Fast forward a couple years and our children have grown: Paisley is 9, Cosette is 7, Fielding is 5, Perry is 3, and Luna is 1. We decided to take the three oldest and leave the two youngest behind with grandma. This simplified things significantly and allowed us to do a somewhat challenging hike.

We set out late Thursday morning and ate lunch on the way. Our start was later than I wanted, but it wasn’t a big deal. We arrived at the trail head at about 3pm. We attempted to follow the dirt road to the second trail head, which would have saved us a couple miles of backpacking, but the Honda Fit just couldn’t make it up the road without doing some damage.

My pack was about 55-60 lbs, as I was carrying a couple sleeping bags, a bunch of food, and a large tent that could fit all five of us. Cyndi had a stuffed pack as well with a couple sleeping bags in it. Paisley was carrying all her clothes and a sleeping bag, and Cosette and Fielding each had a small backpack with their clothes, and Cosette also had some water. Literally 20 yards into the trail Cosette said, “My shoulders hurt,” which I thought was really funny. 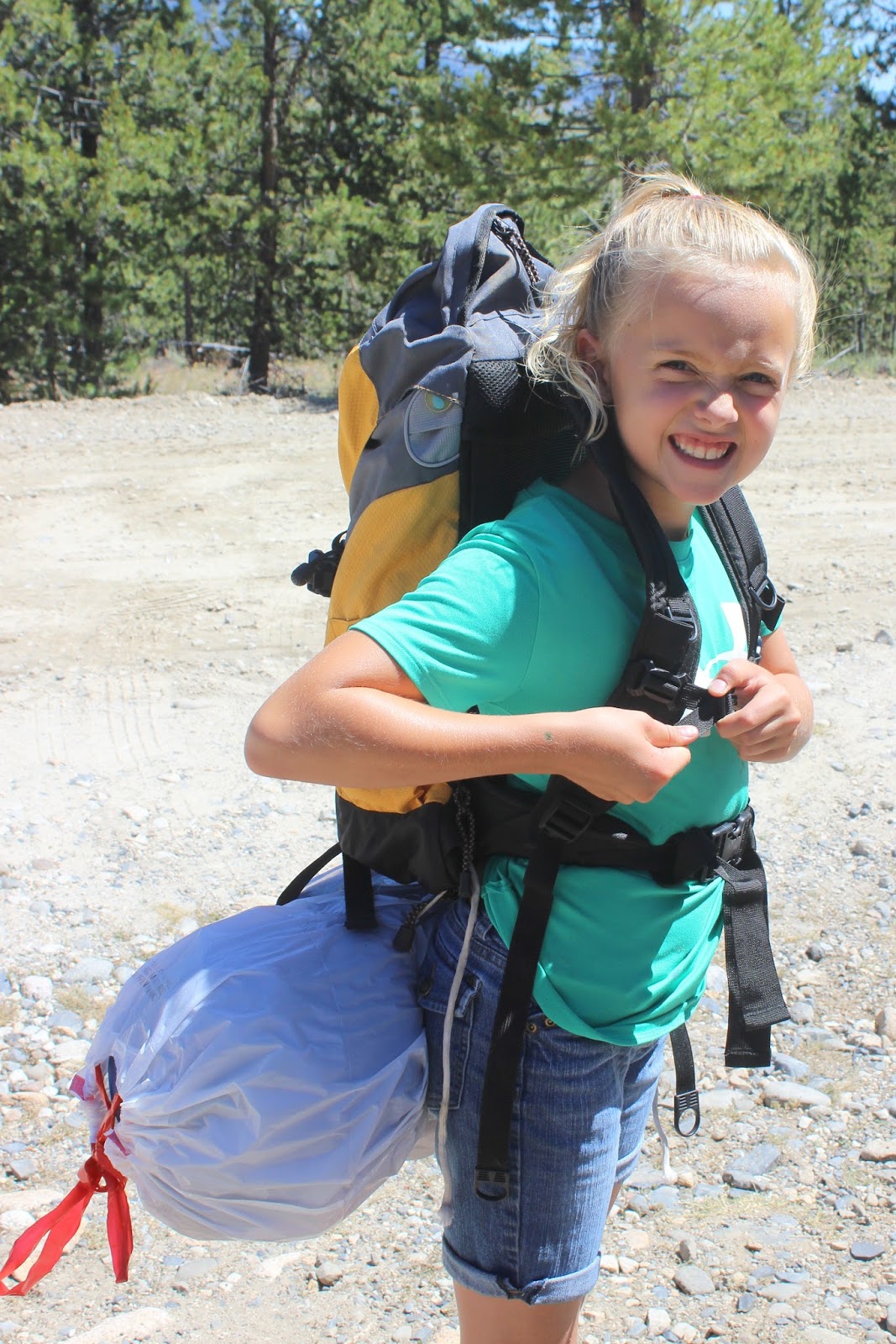 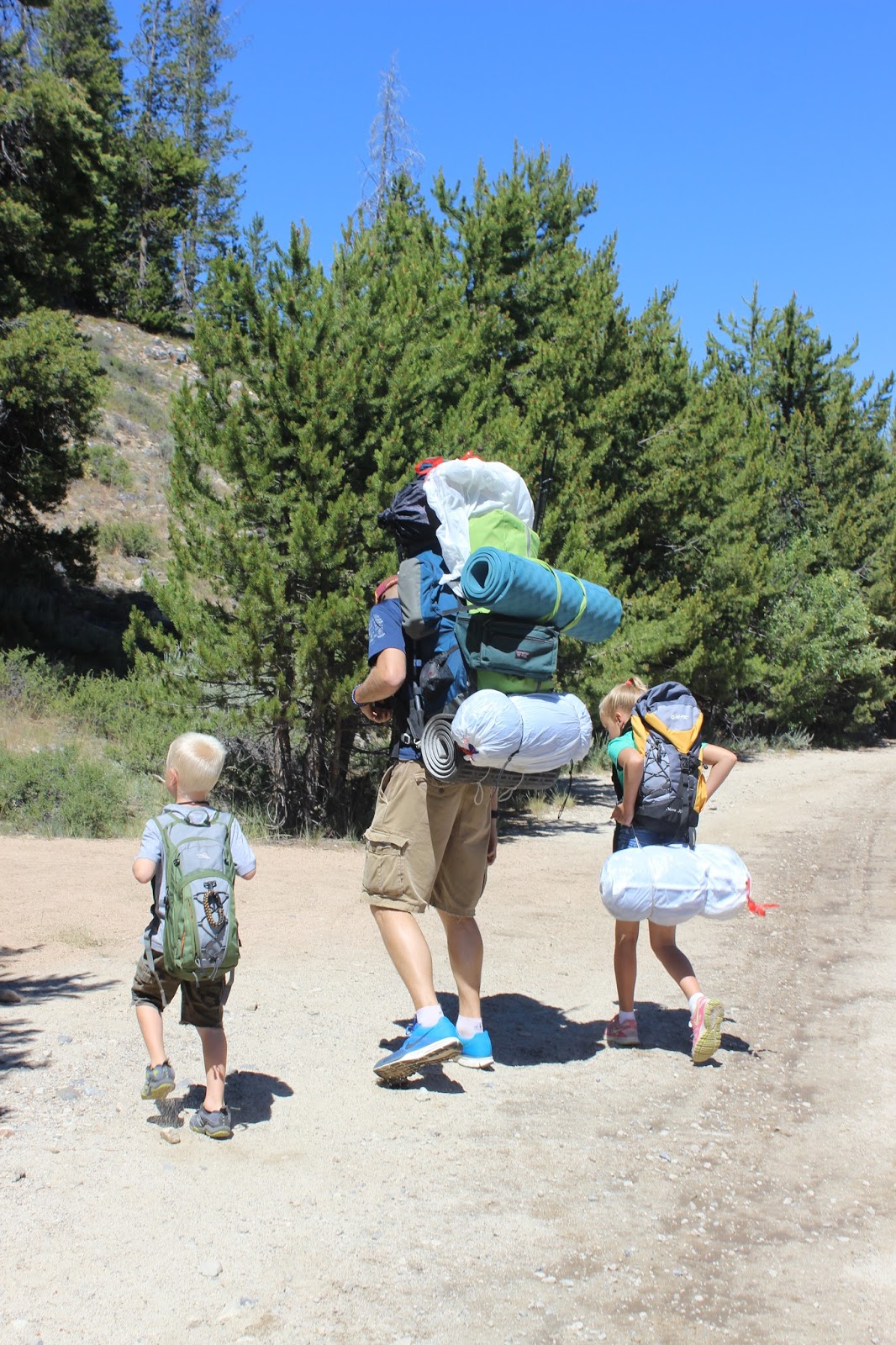 The trail climbs about 300 feet in the first mile. Then has some smaller, intermittent climbs through the rest of the 5 mile trail. It follows the creek that flows out of Hell Roaring Lake, and there are some pretty views of the creek along the way. The trail is partially shaded, but a lot of it is in the sun despite nearby pine trees.

I brought some fruit leather that provided a boost for the kids (and me) early on. We took breaks about every mile, and usually dished out some snack to keep them occupied. I took on Fielding’s backpack after about a mile, and talked Cosette to keeping her backpack until 2.5 miles. Paisley trudged along with her pack and didn’t complain. She did wonderfully. We were all ready to be done by the time we saw the lake just after Mile 5. We picked a camp site near the end of the lake since everyone was anxious to get their packs off and there was a nice one available.

The lake is beautiful, as expected, with a nice creek running out the east end and rocky peaks surrounding the west end. The Finger of Fate points to the sky among the rocky cliffs in the west. I didn’t expect good fishing as I knew that Hell Roaring Lake was a pretty popular destination, but after setting up the tent I headed out to see what I could do. We weren’t very hungry since we had been snacking the whole way up, so we weren’t ready for dinner yet. 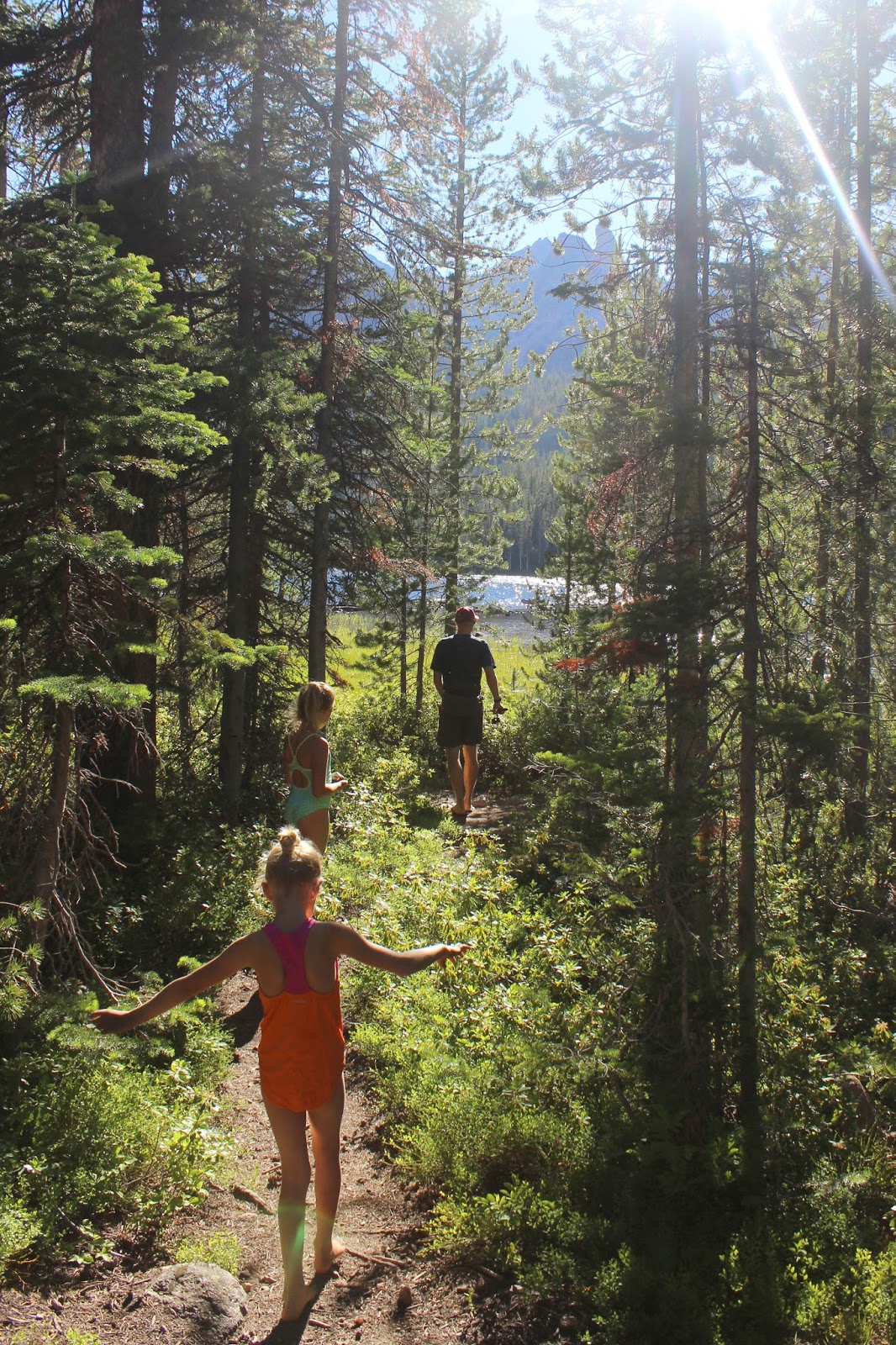 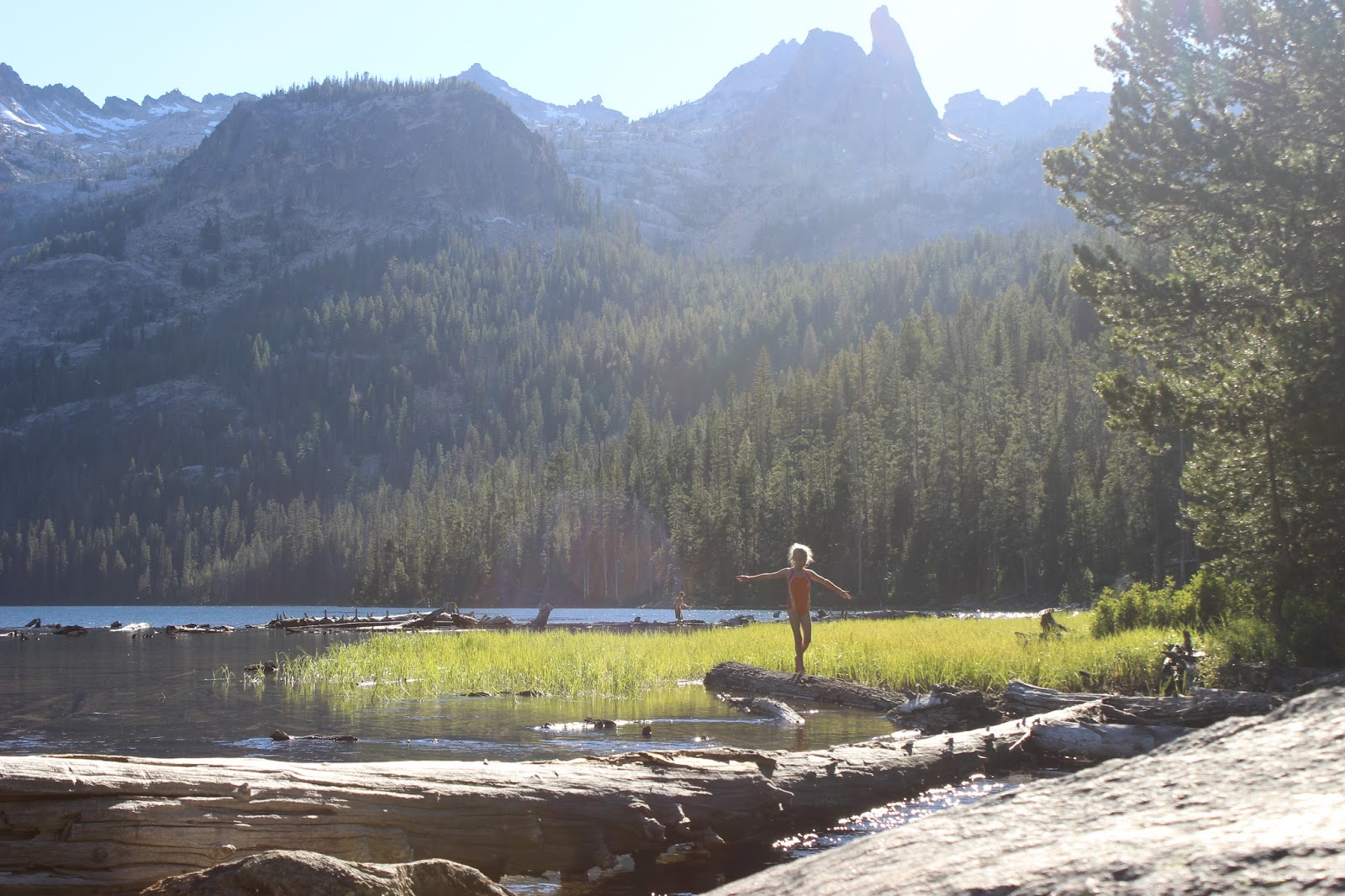 I tried fishing among all the logs piled up on the east end of the lake, and sure enough my first cast was a snag. I didn’t want to lose my lure on my first cast, so I waded out to retrieve it in the cool, but not freezing, water. I cast again from the spot of the snag while standing waste deep and caught a fish on my 3rd cast. I caught a couple more fish in the next half hour and had some bites besides that. I took the fish back to camp and we had some trout (albeit small ones) along with our rice dinner. Our kids all love trout and picked the skeleton clean. That night we had s’mores and went to bed around 10pm. After a decent night I woke up at about 5:45am. Paisley followed me and we headed out to do more fishing. We ended up hiking a few minutes up the south side of the lake to find a deep spot. I landed a decent size fish pretty quickly and Paisley was jealous. I coached her a bit and she soon landed a bigger one. She was really happy and after trying our luck a little longer, we headed back to camp and had more fish along with our pancakes. These fish had probably three times more meat than my fish from the previous night, which was a good thing since I struggled to cook decent pancakes in a little mess kit. 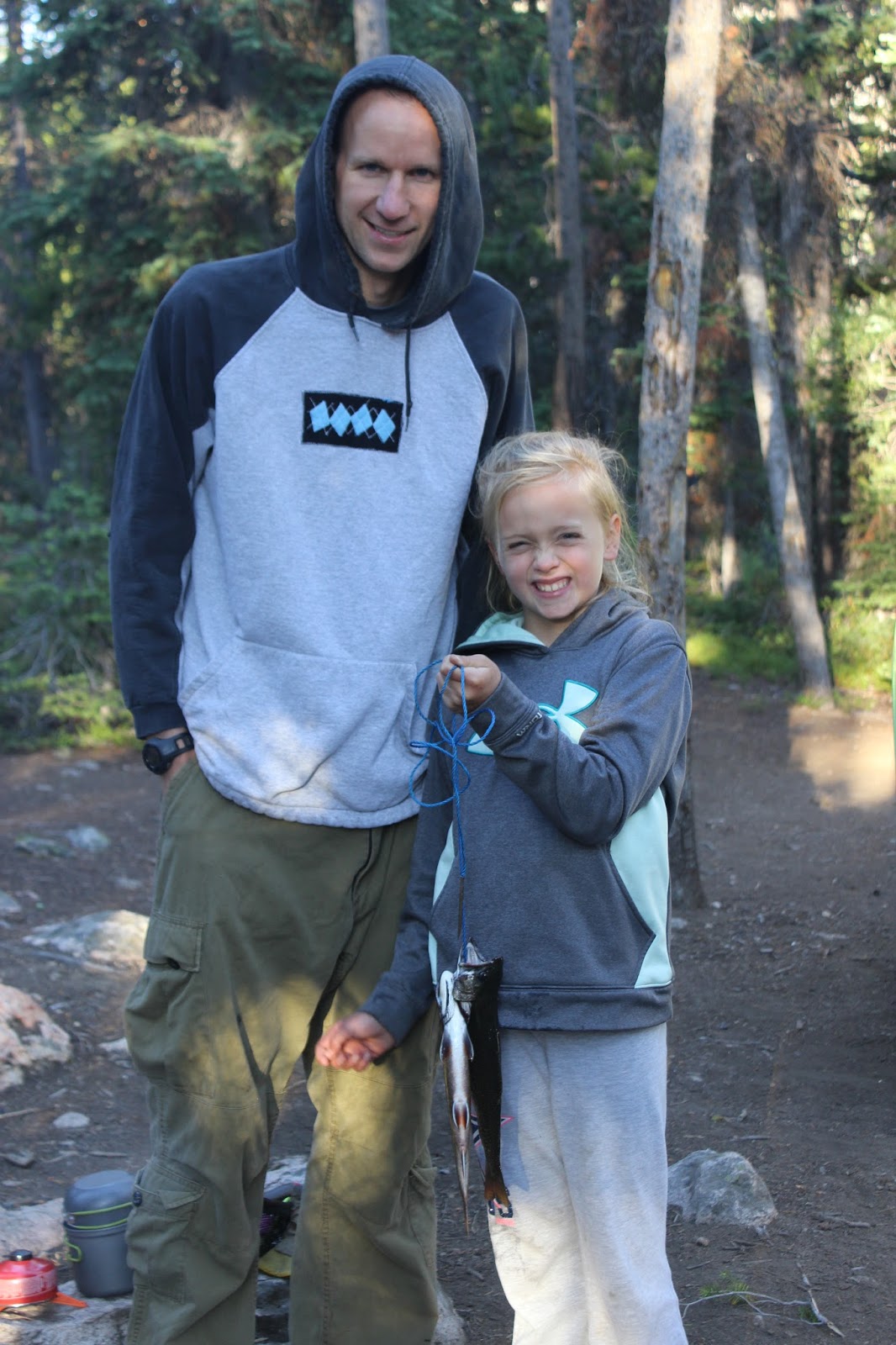 After breakfast it was time for our day hike. There are four lakes over the ridge on the west side of Hell Roaring Lake. Two of the lakes have fish in them (they’ve been stocked by Idaho Fish & Game every couple years). I wanted to at least check out the lower lake and figured it would make for a good day hike.

We set out on the south side of the lake and made quick progress along the trail. Eventually we needed to break away from the main trail and head northwest before the main trail turned for Imogene. We found a small trail to follow and started making our way over. Fairly soon we were bushwacking through some dense brush and over logs to cross several small streams. I figured we’d come across a trail going up the steep hill before long, but we never found it. Once we were near the main creek that flowed from Hell Roaring Lake #2 to the main Hell Roaring Lake, we started heading directly up the steep hill.

We had to do some significant boulder hopping, and the horse flies were making it somewhat miserable. It took a lot of encouragement to keep the little ones moving and I had Fielding and Cosette on my shoulders at several different points. We eventually started coming across some cairns, and this provided some nice goals for the kids to aim for and a nice distraction from the difficulty of the hike. 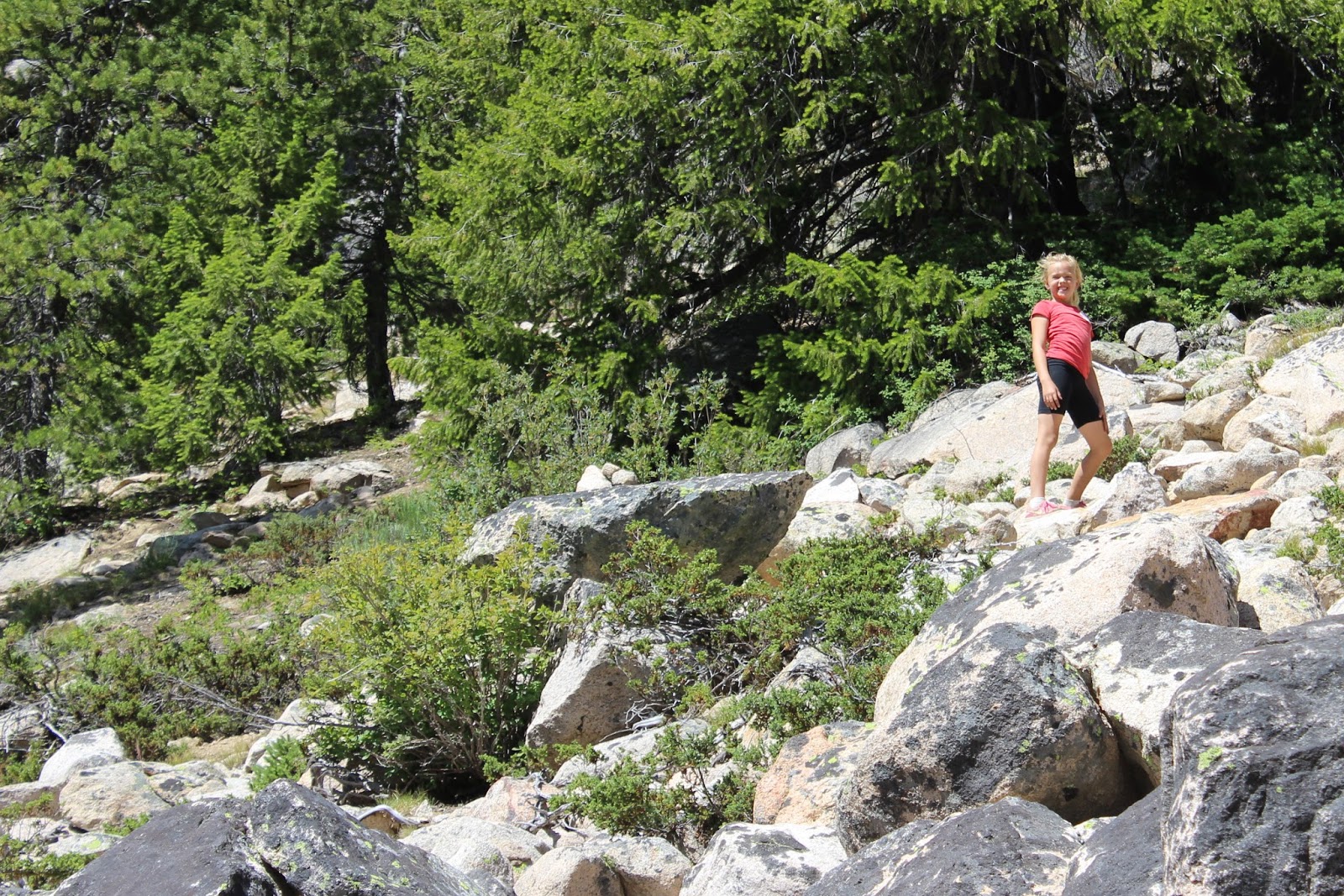 We finally rounded the top of the hill and found the lake we were looking for. It was quite nice. It provided a nice view of the Finger of Fate and was graced with a waterfall high up the next incline. We ate lunch, refilled our water, and the kids played. Paisley and I each caught some fish. It started to get windy and partly cloudy. The difference in temperature when a cloud was overhead was pretty startling. After spending about an hour at the lake, we headed back down.

Shortly before we headed down, an older gentleman was making his way up on his way to summit Decker Peak. We decided to head the direction he came up, and we were pleased to find a nice trail all the way along the north side of the creek down to Hell Roaring Lake. The trail was still steep, but it was WAY better than boulder hopping down the mountain. 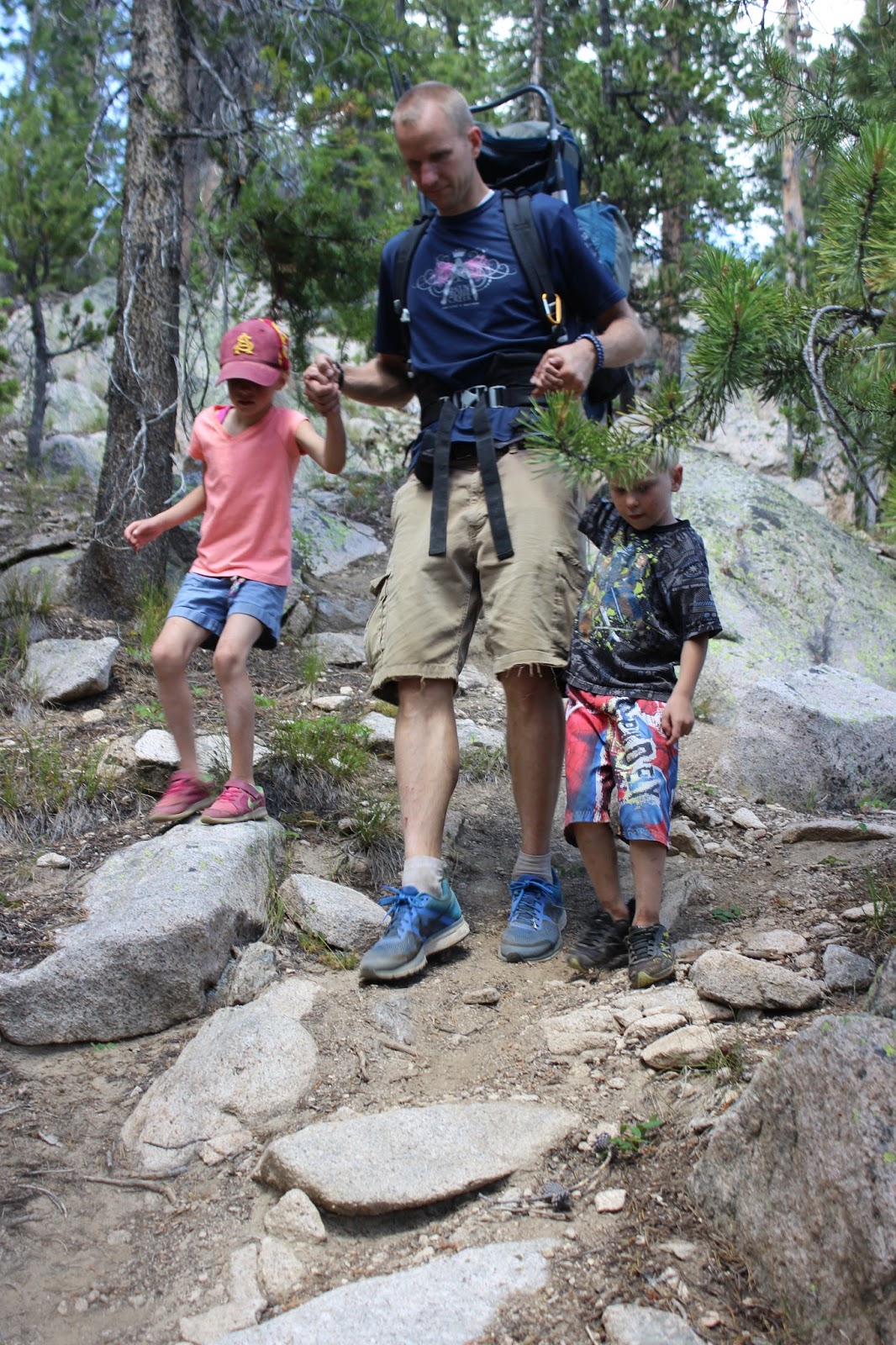 The trail came out and around the north side of Hell Roaring Lake, so we took it all the way back to camp. Even though the trail was easy to follow, it had a lot of brush and downed logs, so we were all scratched up and exhausted by the time we got back. 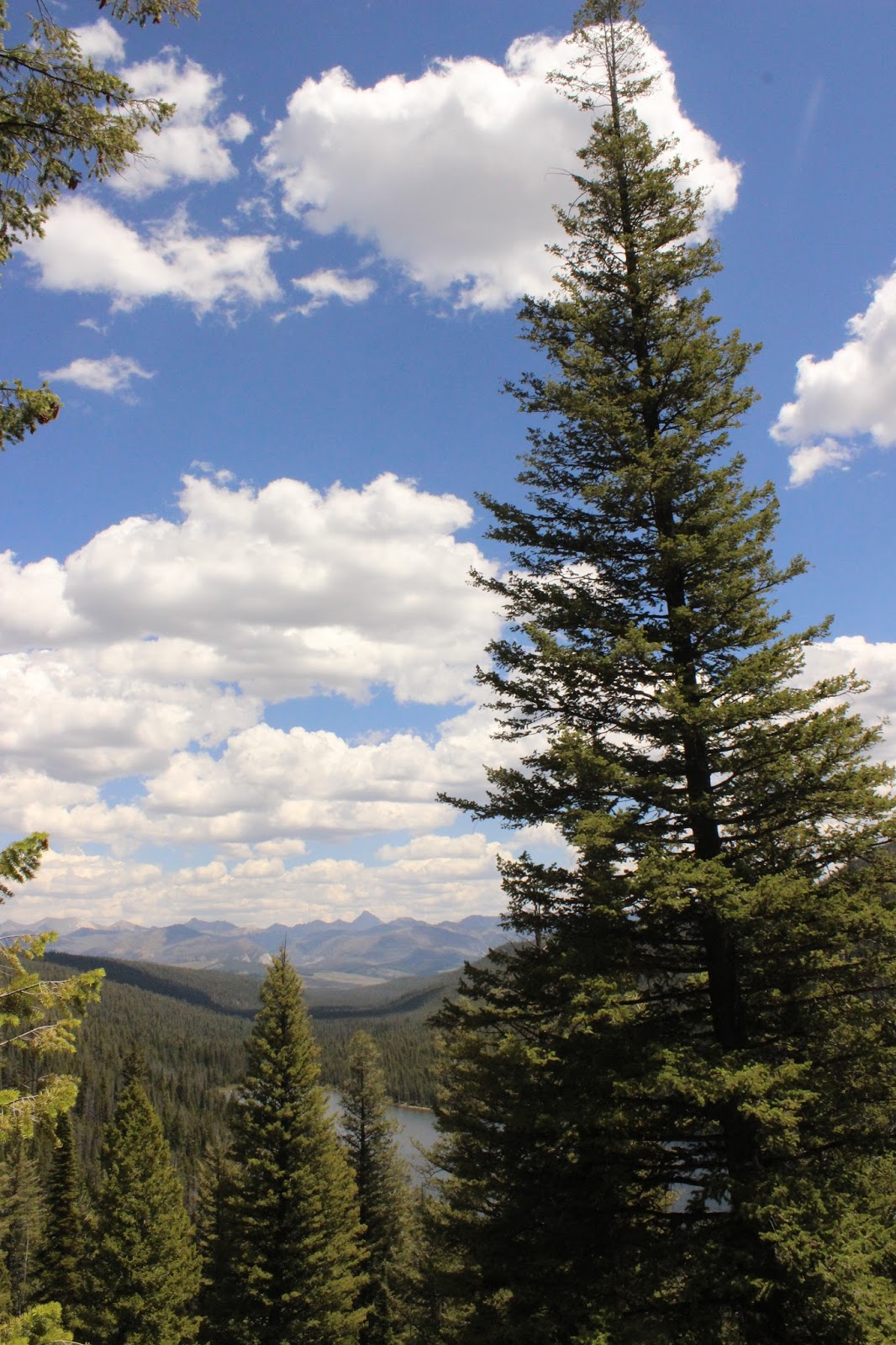 Cyndi and I tried to convince the kids to just hike out that afternoon as we weren’t looking forward to sleeping in the tent again and hanging around camp for a couple hours. The kids wouldn’t have it. They wanted to camp one more night, so we fished a bit more and played in the water. We ate a nice dinner and packed up as much as possible to get an early start on Saturday morning.

In the morning we made oatmeal and hot cocoa, cleaned up, and hit the trail around 7:30am. The kids did about as well as on the way up and the backpacking went at a similar pace. It was nice to go downhill this time. We only passed two hikers on our way out, which was a surprise.

Everyone was happy to reach the car and everyone but me fell asleep within 30 minutes.

We had a great time overall and I look forward to more of these in the future. The hike was just challenging enough for our kids without overdoing it. I can’t wait until they are old enough to do a 50 miler with me!

One thought on “Family Backpacking to Hell Roaring Lake”